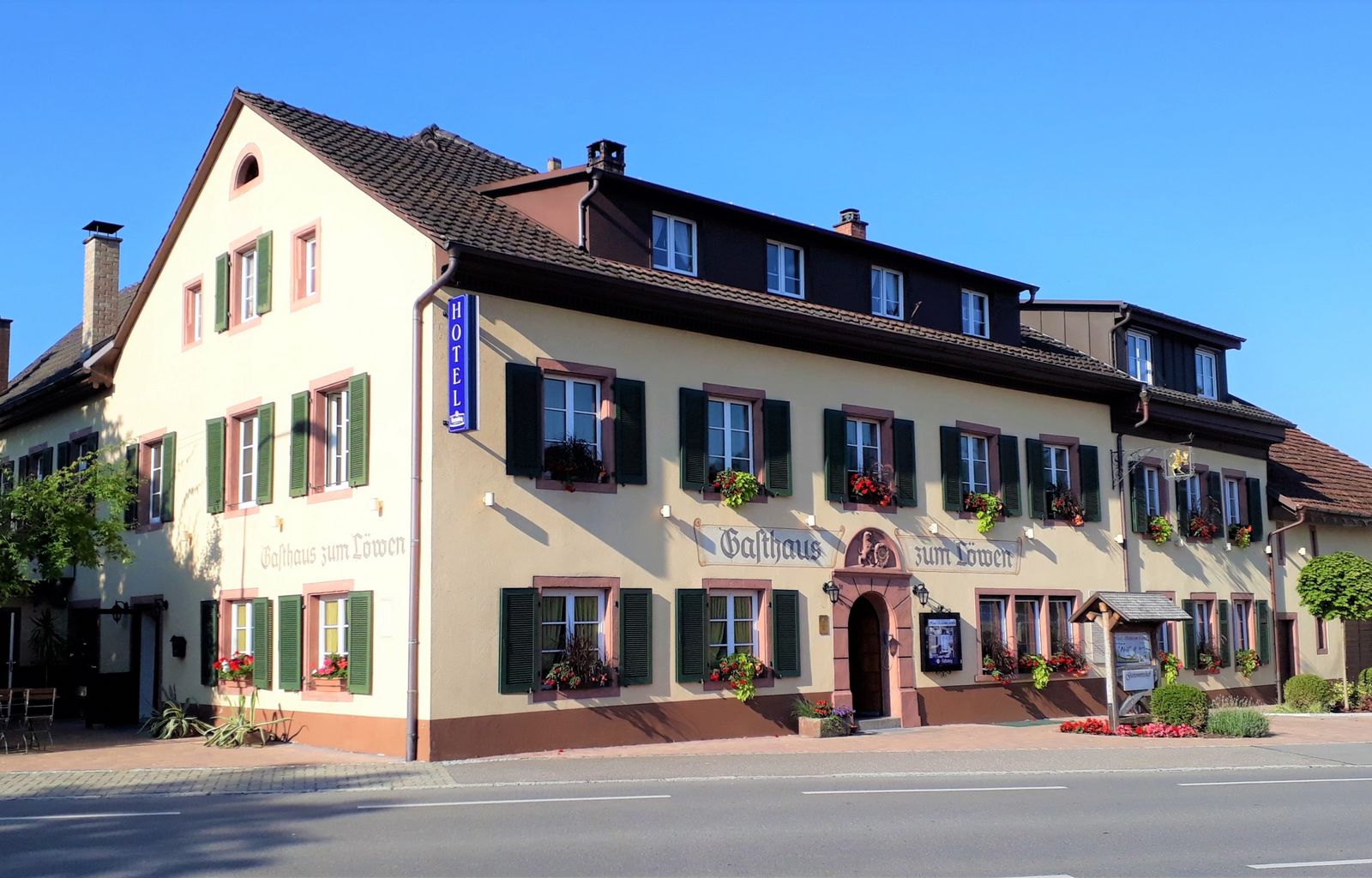 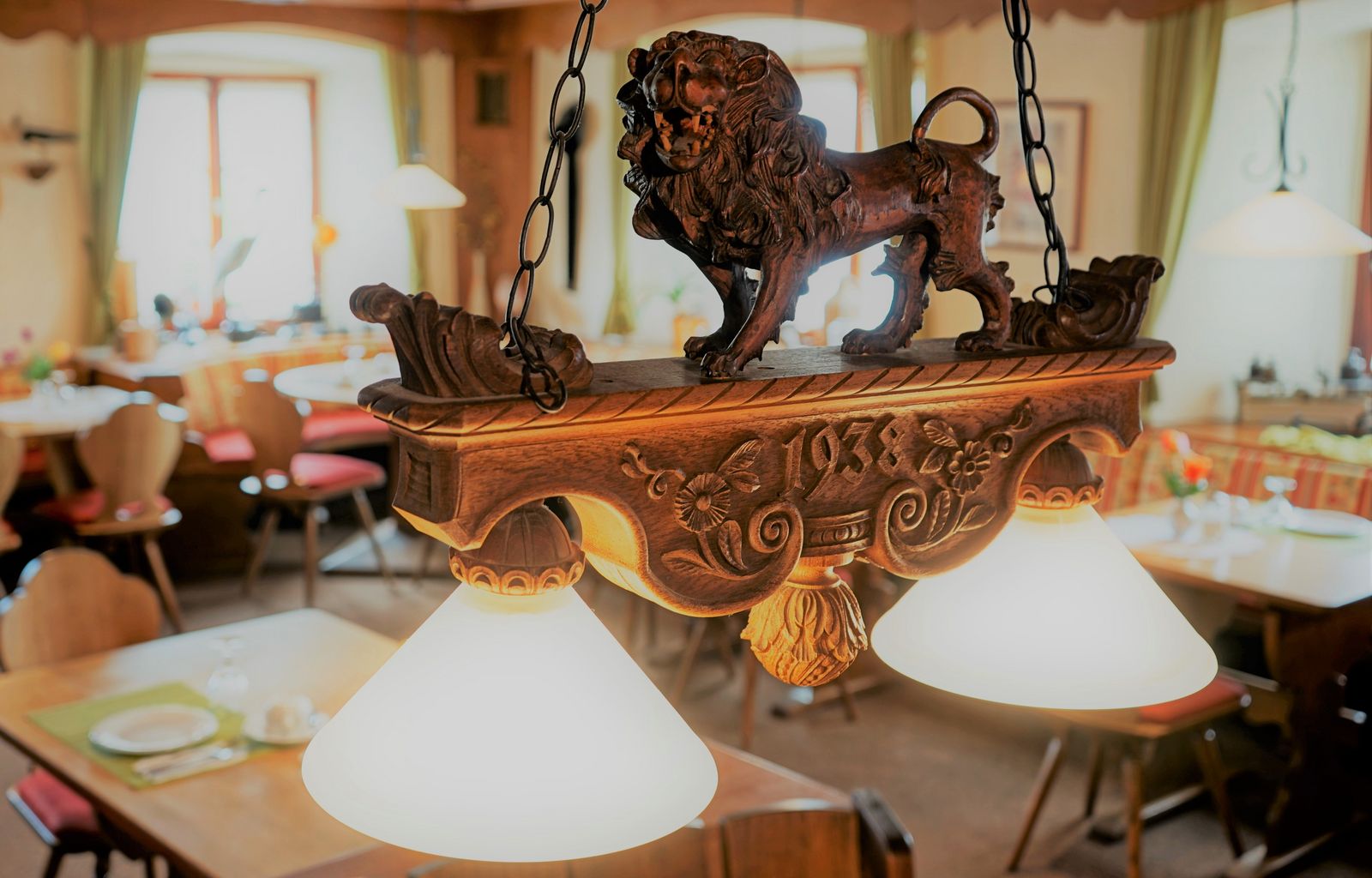 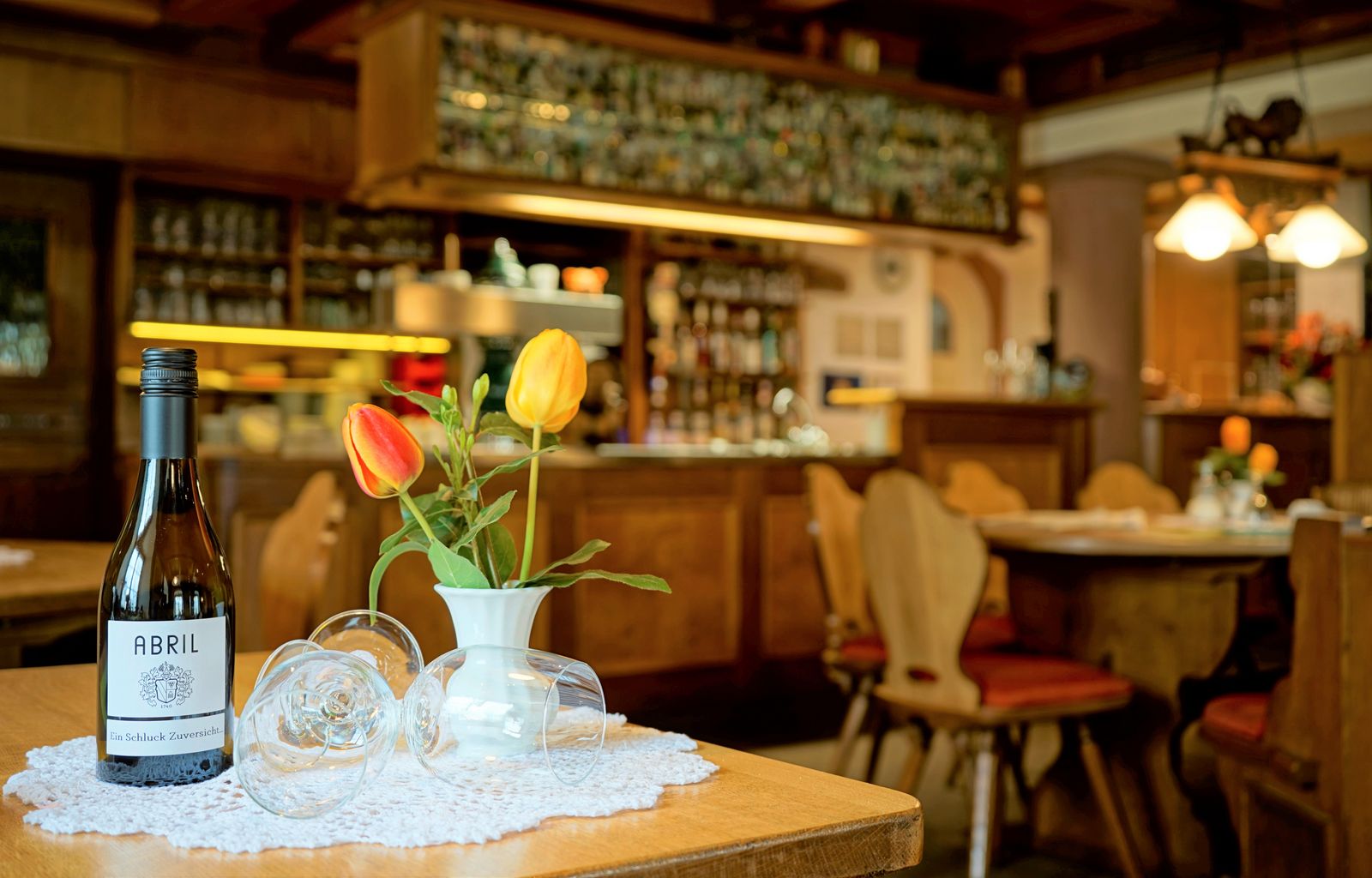 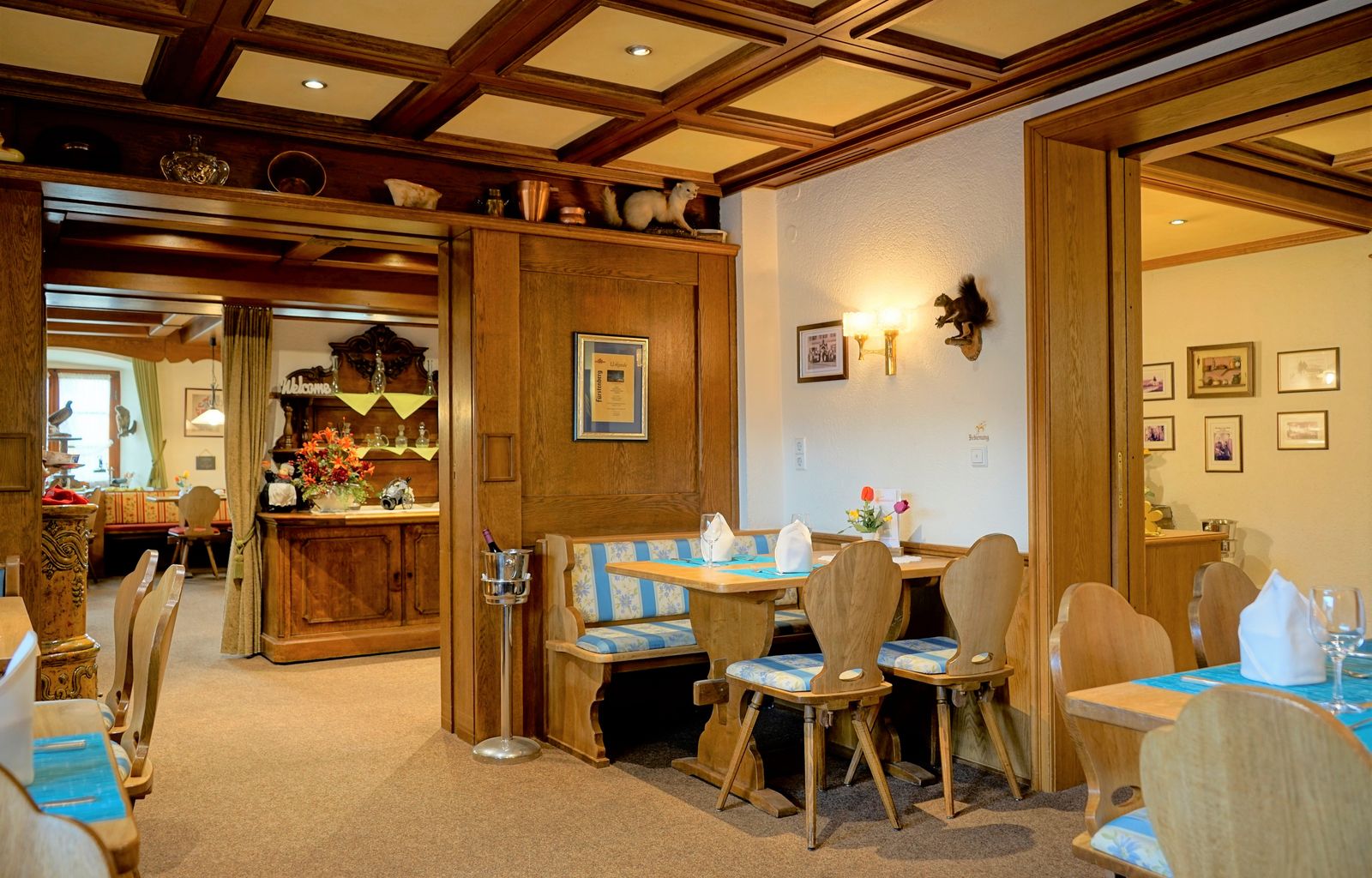 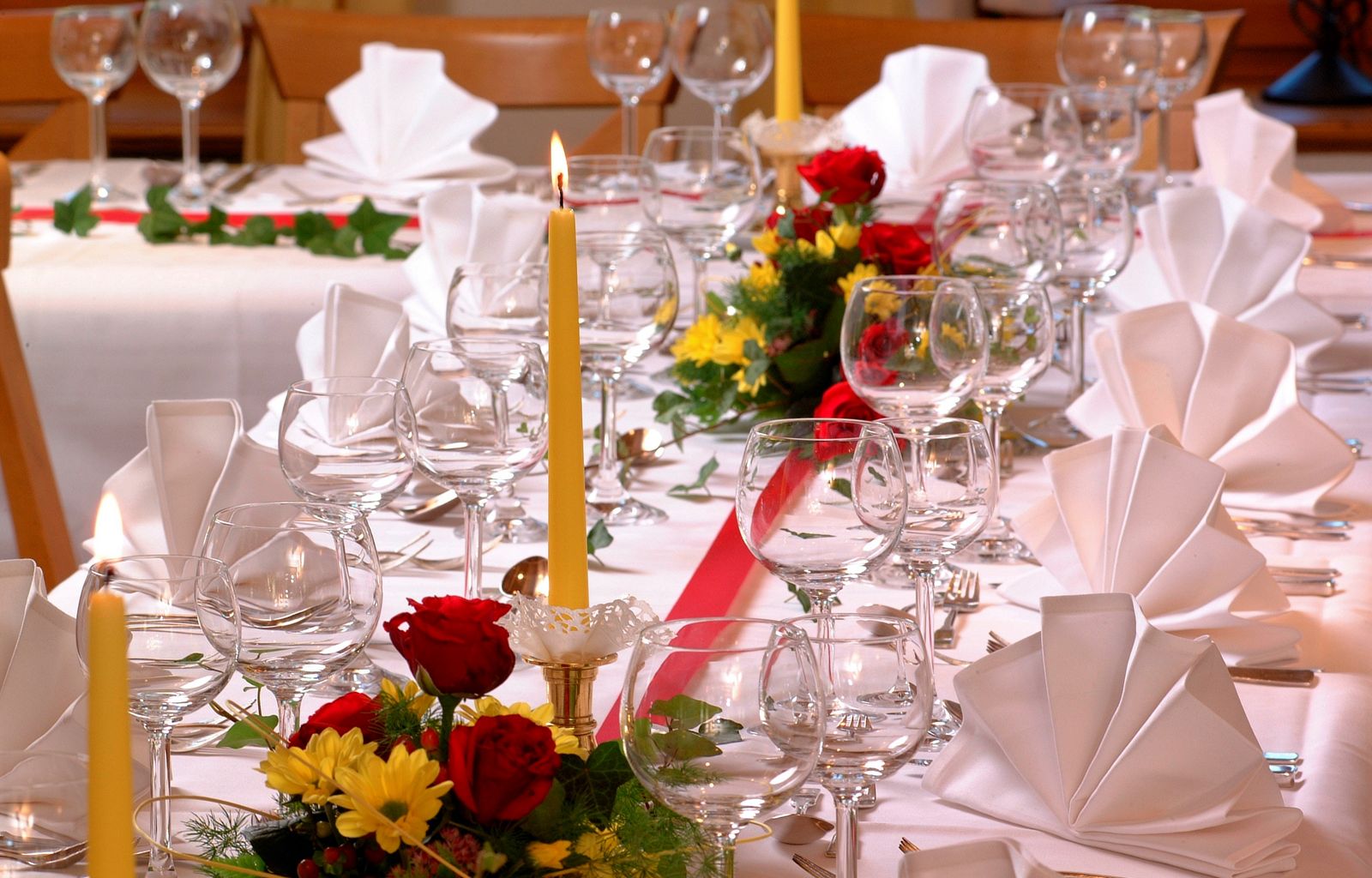 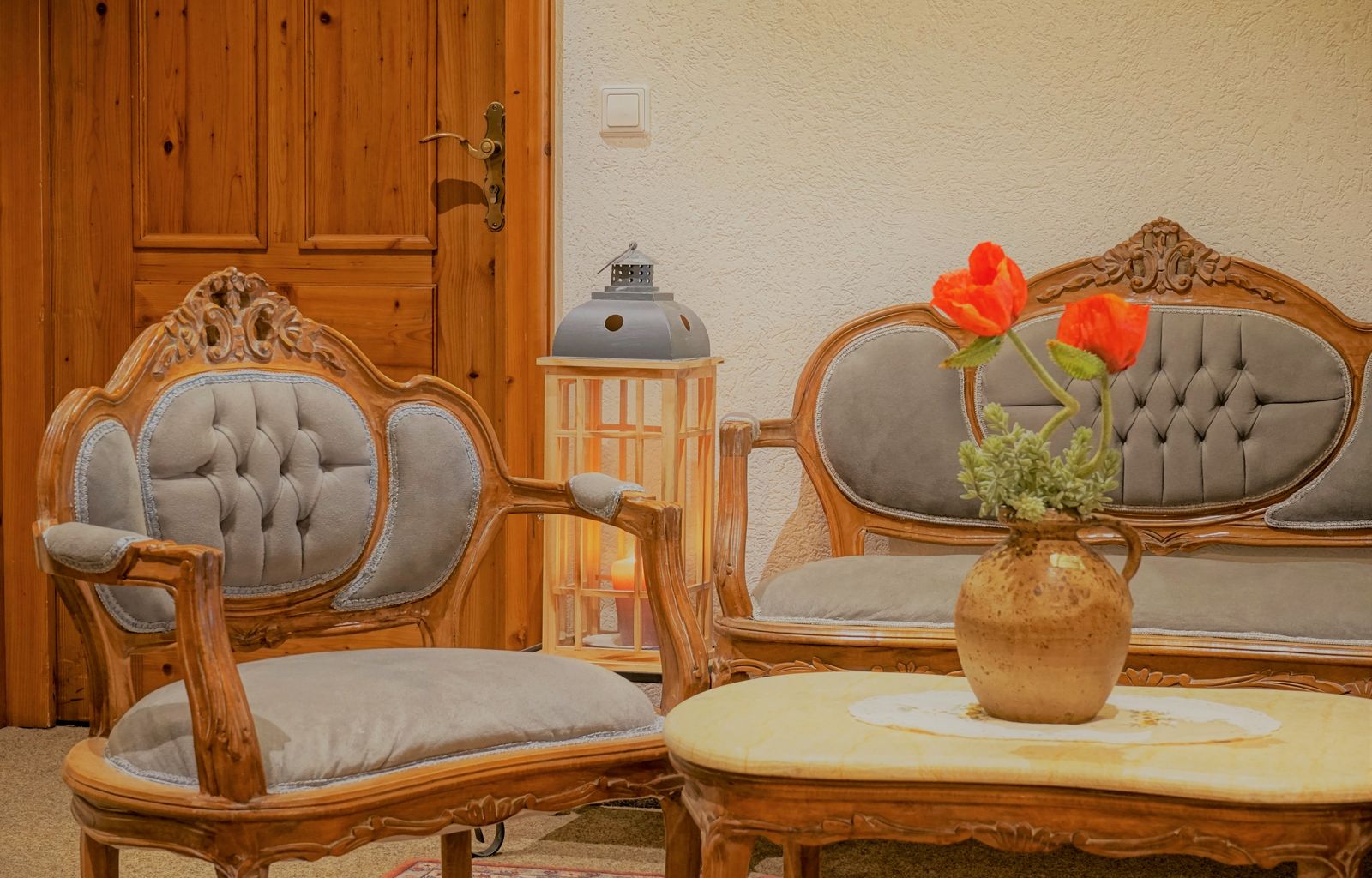 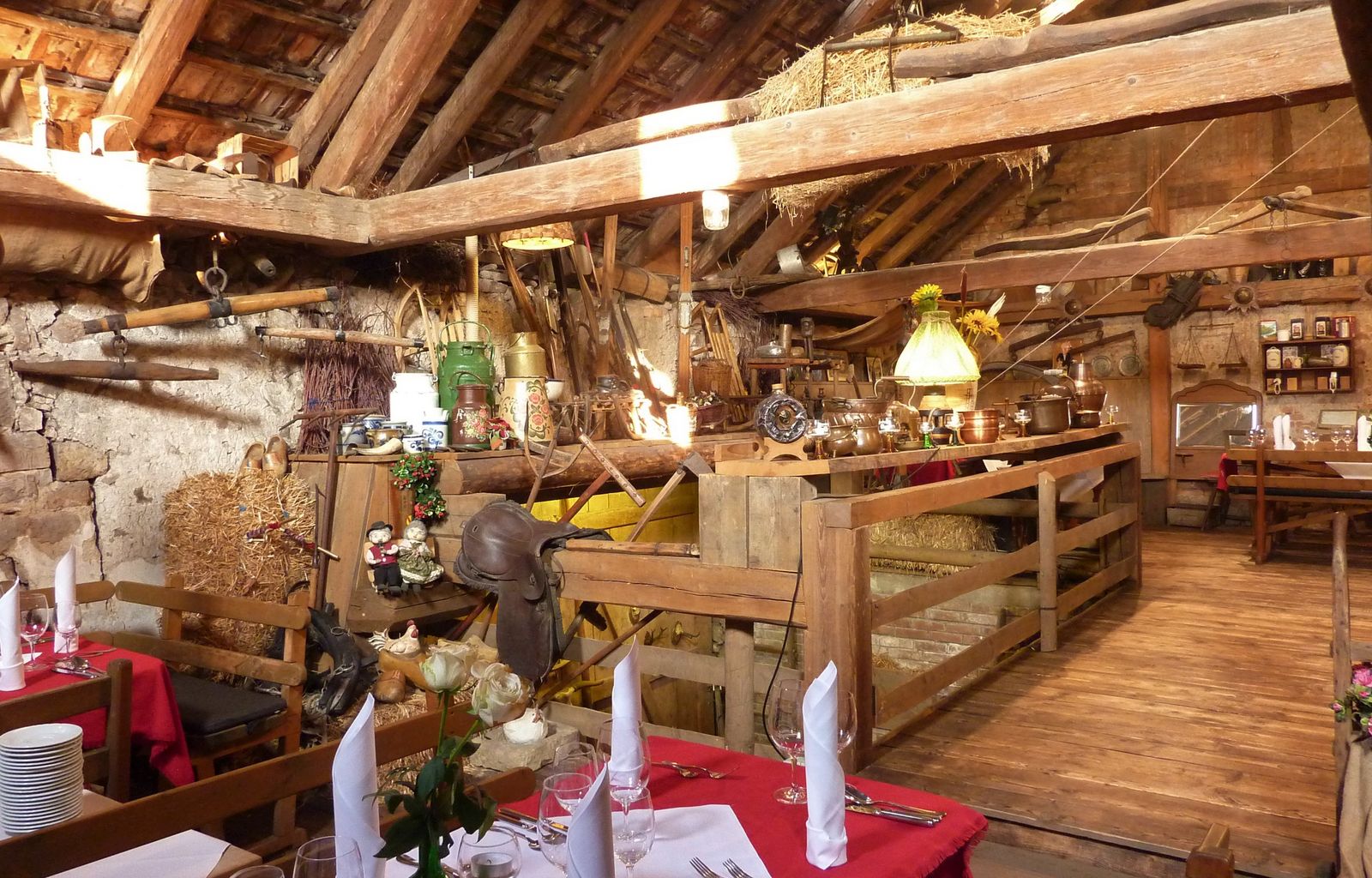 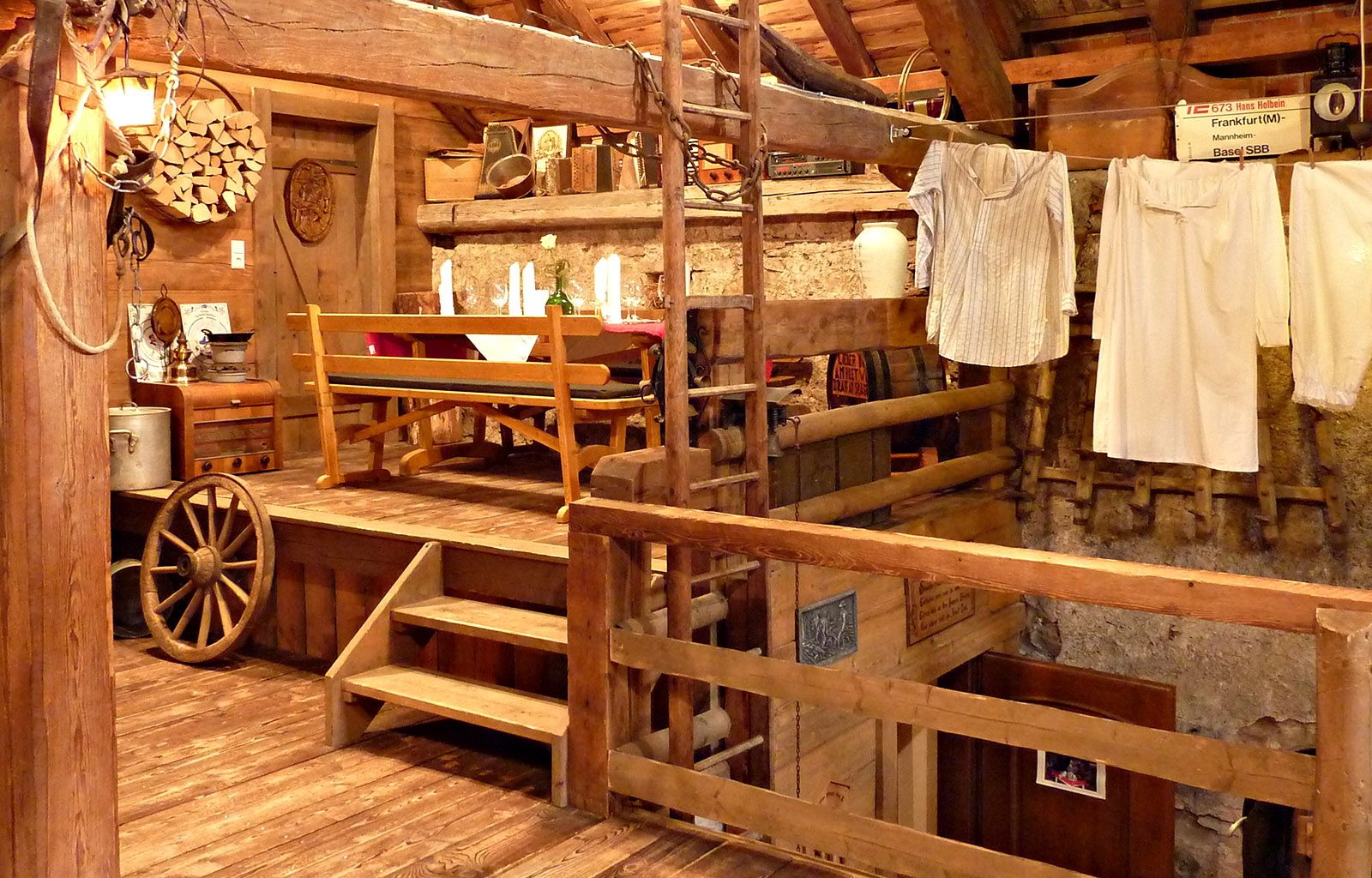 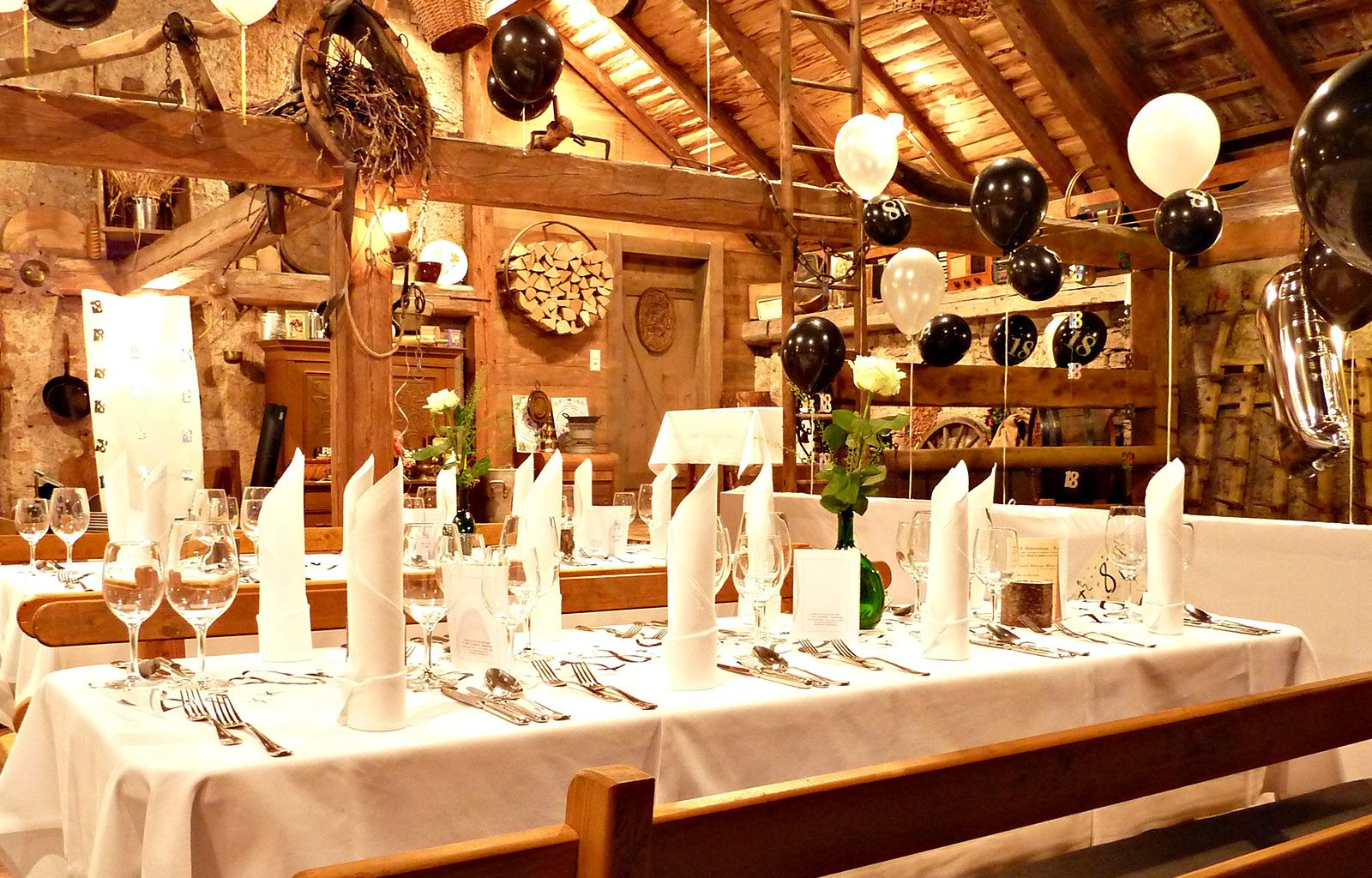 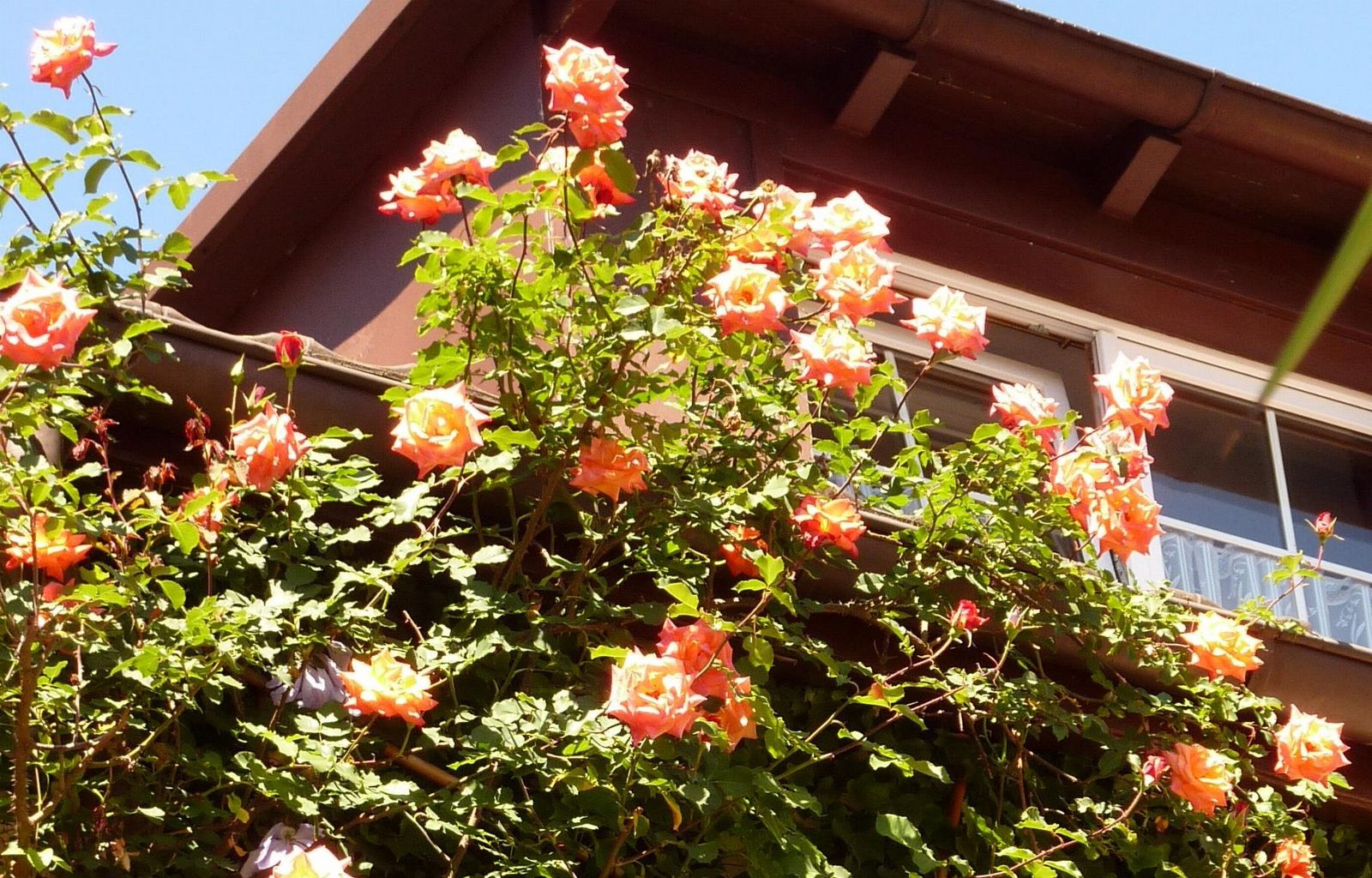 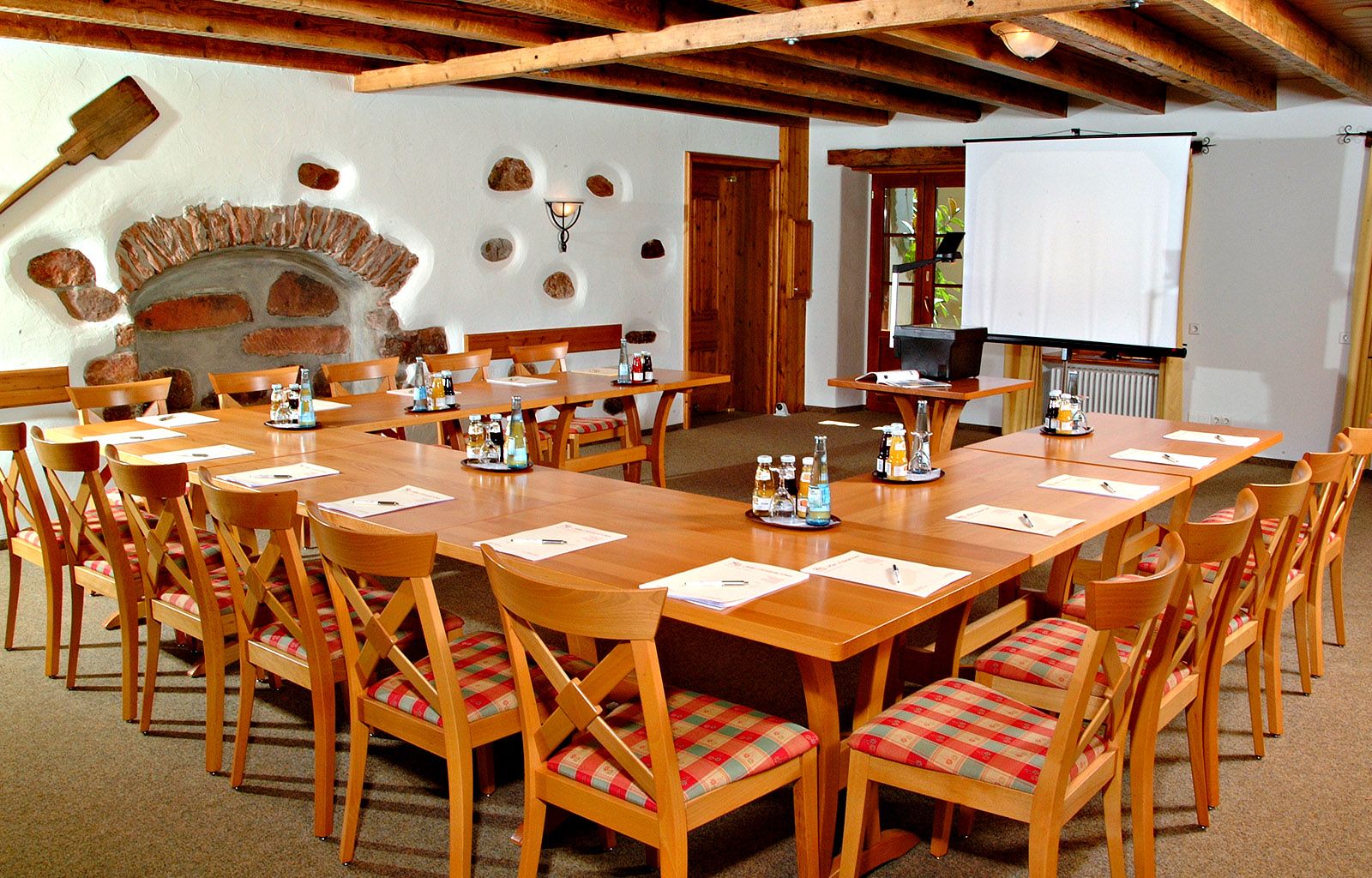 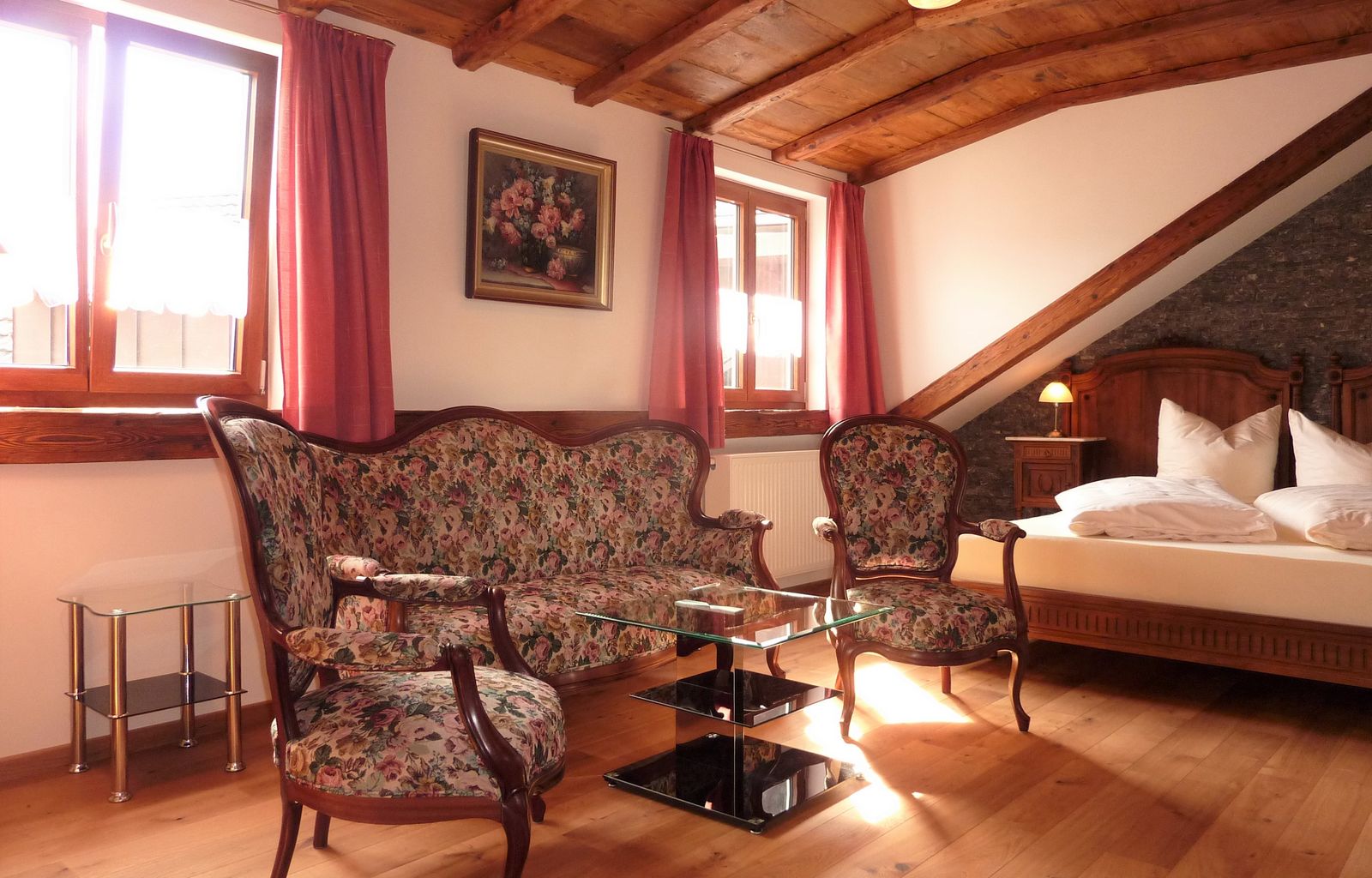 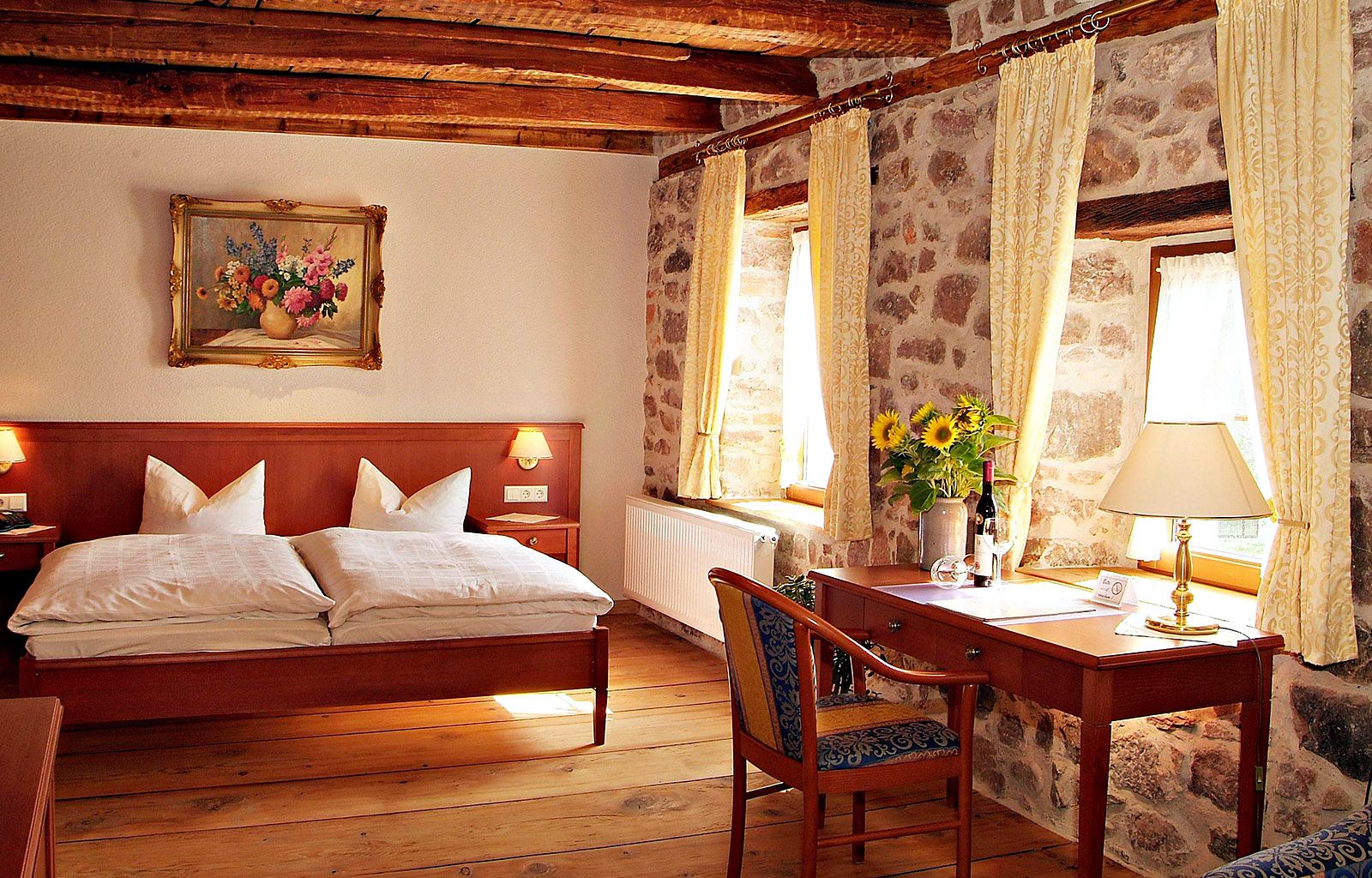 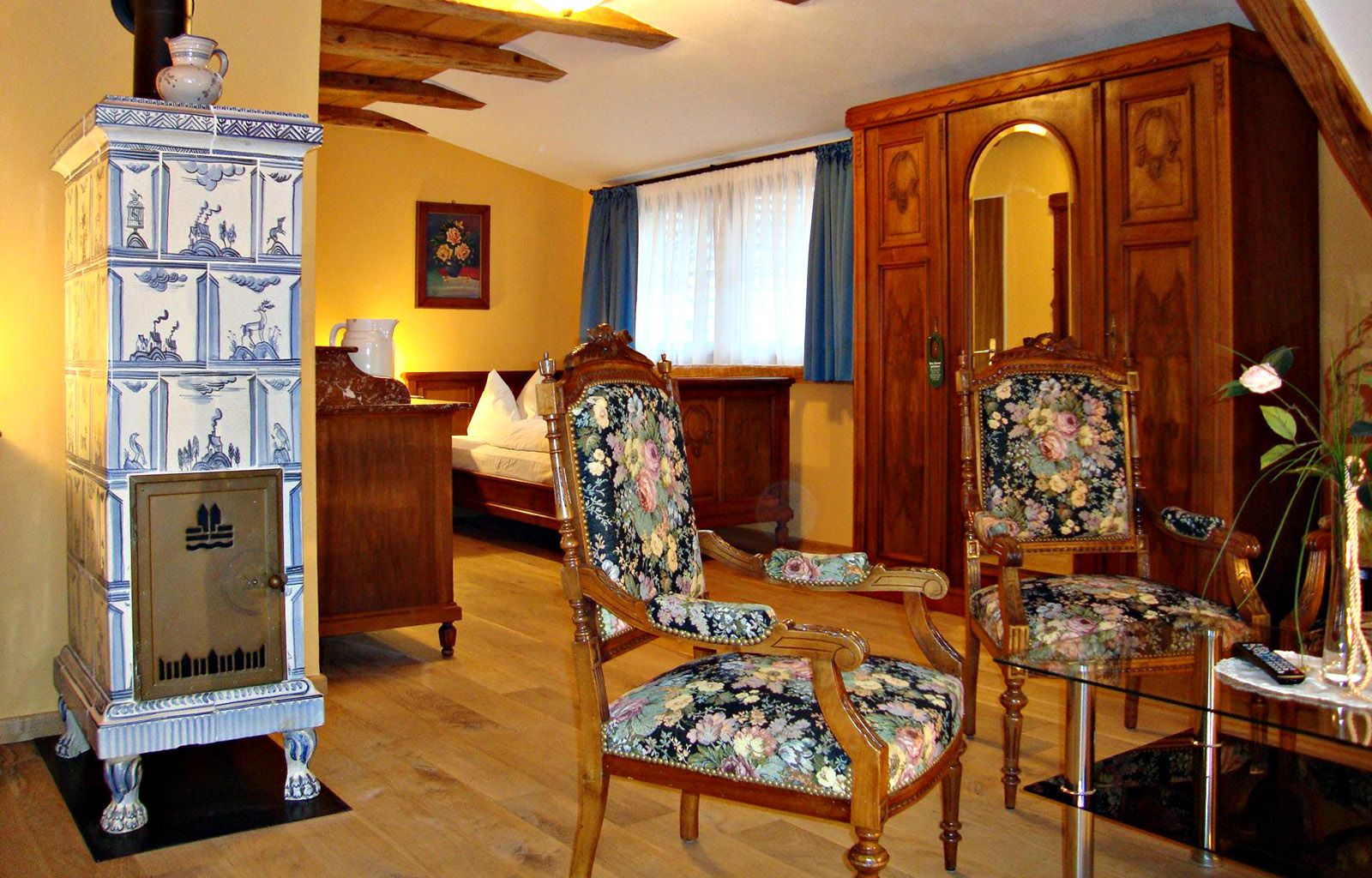 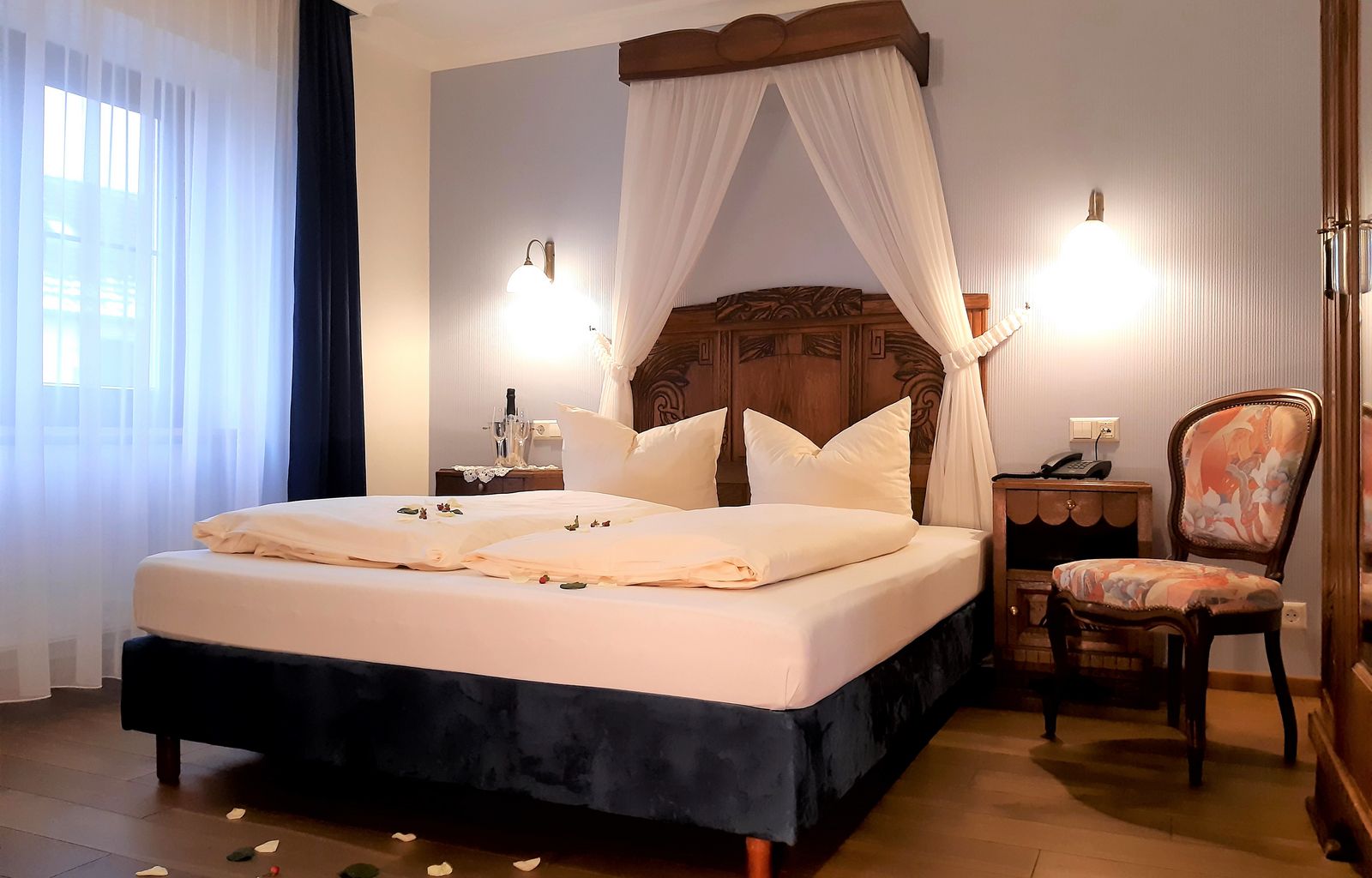 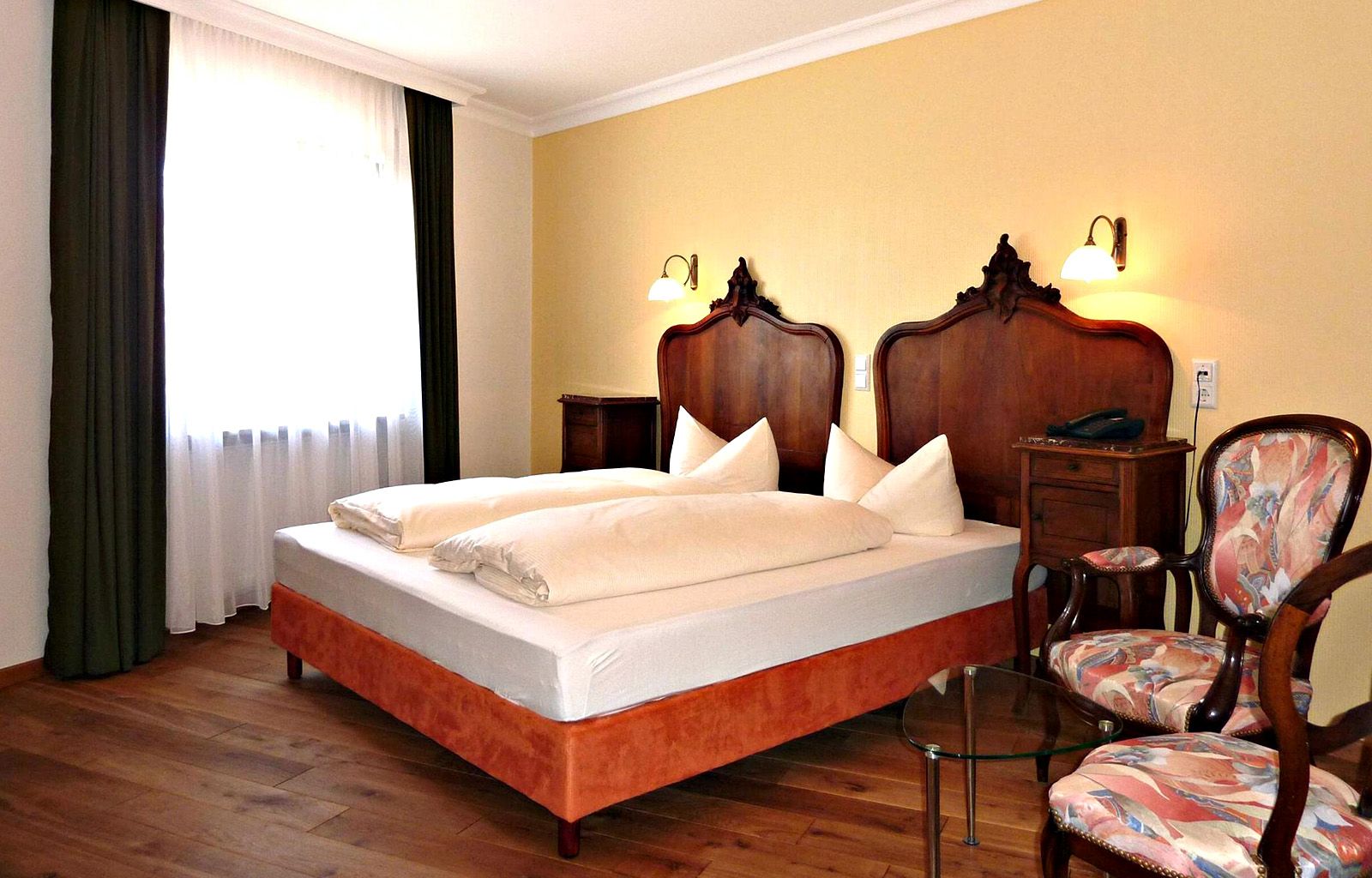 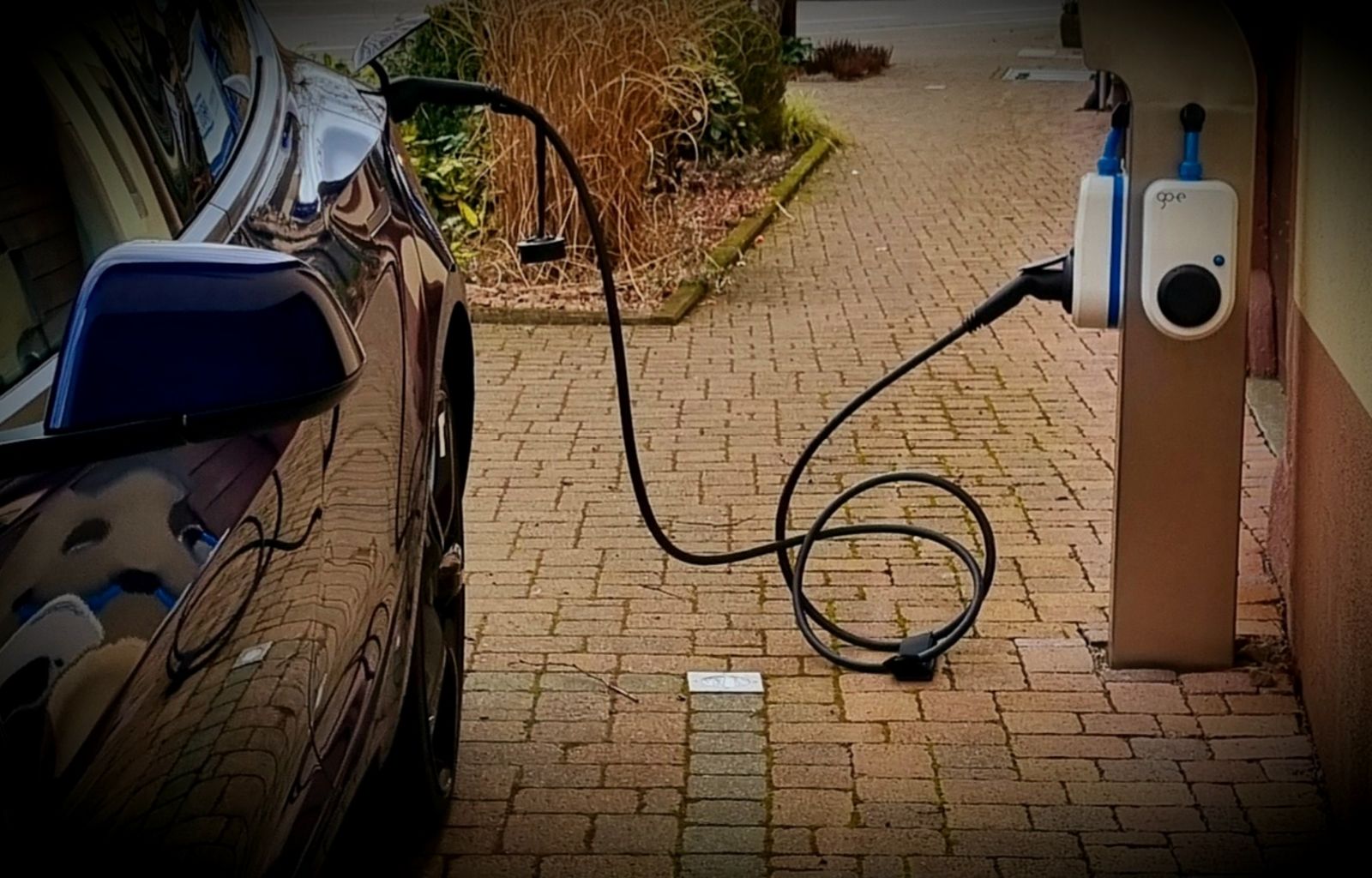 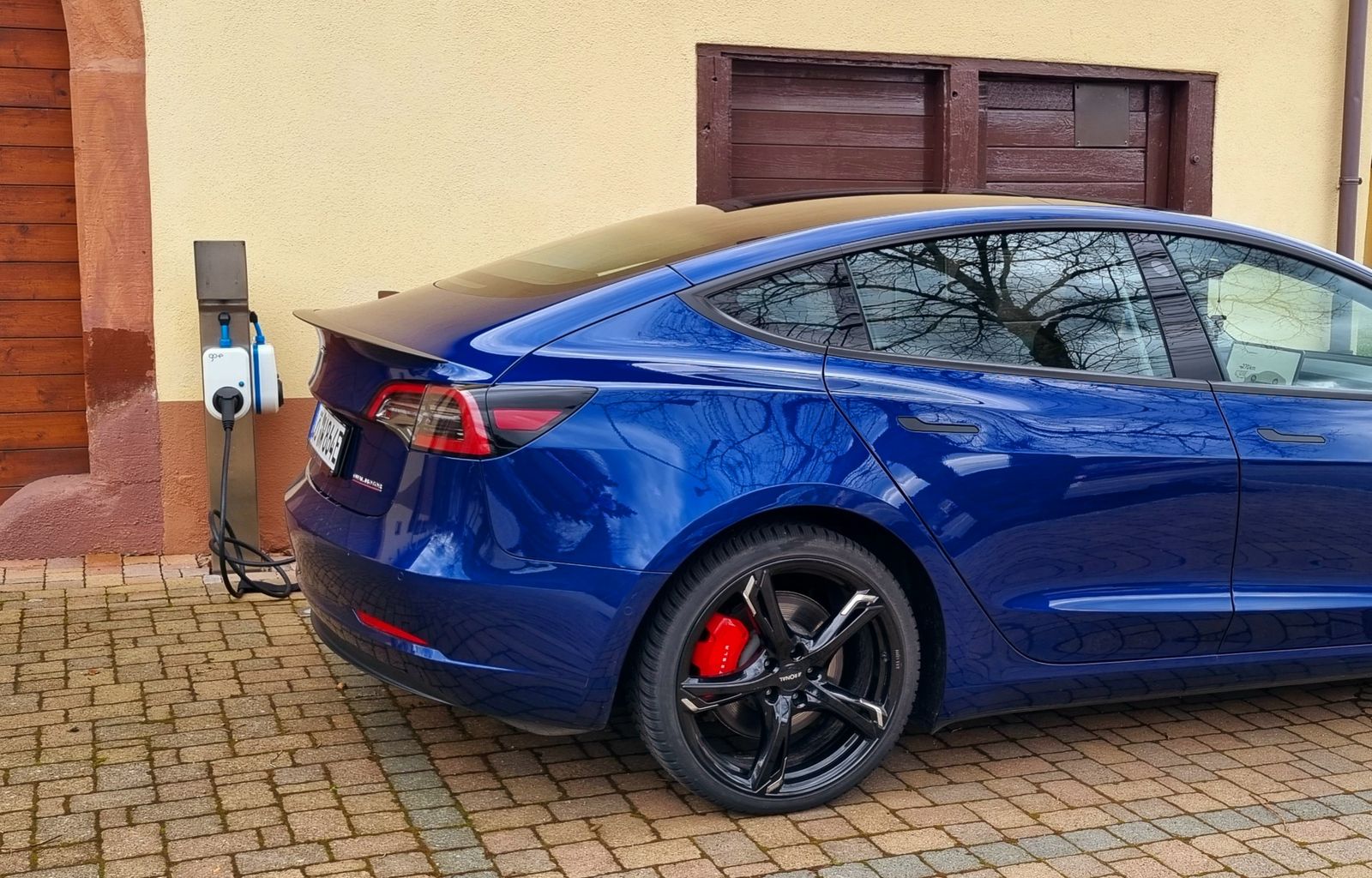 Take Away -
Get yourself !

Alemannic hospitality for more than 4 centuries ...

Imposing and inviting at the same time is the traditional Landgasthof Zum Löwen in Schopfheim, in the Gündenhausen district. An old well in front of the historic property, next to it a barn, next to the main building a beer garden with mighty chestnuts and a herb garden, the inner courtyard a green oasis .

For more than 400 years, travelers have rested here and fortified themselves with "food and drink". The magnificent boom with a golden lion with a wine goblet in hand testifies to the hospitality that has been cultivated for centuries at the Löwen in Schopfheim .

Of course, nowadays the comfort in the rooms and the quality of the food and drinks are incomparably higher than in the past. But the historical charm that we have received everywhere in the house. And in our "feel-good chambers", tiled stoves meet chic bathrooms, Art Nouveau furniture meets exposed walls, artfully decorated wooden beds meet health-promoting modern mattresses.

Step into the Baden cosiness in the Löwen and let yourself be pampered with culinary delights. With us you are simply doing well - whether on your business trip or on vacation ! And for your family celebration or your company celebration, we can recommend our original historical rooms ...

"My favorite restaurant, my favorite kitchen, my favorite service!" ... "Very good price-performance ratio" ... "A super location" ... "Excellent cuisine, lovingly prepared" ... "A tastefully restored suite with stylish little tiled stove "..." A great hotel, especially if you take one of the comfortable rooms, which are furnished differently. In summer, nice beer garden or nice to sit outside in the inner courtyard. Very nice staff! - We would like to thank everyone who rated us!

Location close to Lörrach and Basel in the Wiesental

There, where the lovely Wiesental extends up the slope into the Black Forest, you will find us in Schopfheim in the beautiful Markgräflerland. We are a quarter of an hour from Lörrach, half a hour from Basel. Practical for business trips as well as for vacation ...

In the third generation: your host Walter Grether

For me, Walter Grether, it is something very special to preserve the legacy of our grandparents and to continue to shape it in the 21st century. After excursions into the big wide world, we returned to the Löwen and since then we have worked tirelessly for you, our dear guests, with all our hearts. We would be happy to tell you personally about the history of our house ...

... of the lion in Schopfheim

Finally arrived! You may think so when you get out of our parking lot with your suitcase and look forward to a good meal and your beautiful room at the Löwen. Back then, however, the joy of finally arriving at the hostel after long hours on bumpy roads, without being robbed or broken axles of the carriage, was probably incomparably greater ...

Back then, of course, there were no fancy bathrooms and cozy beds, candlelight dinners or wines from all over the world like there are today at the Löwen. Nevertheless, efforts were made as early as the 17th century and later in the stagecoach era to provide the best possible care for the guests. Located on the trade route to Basel, at the entrance to the small meadow valley, the lion was an important post office exchange station. The horses came into the stable - which is now our event barn "Alte Schüüre" - and there was food and drink and "physical delights" for travelers such as carters, traders, couriers and craftsmen. At the time of the Stupfer family in the 17th and 18th centuries, the Löwen even had medical treatments and a haircut.

In 1651, shortly after the Thirty Years' War, Johann Stupfer acquired the property "Zum Löwen" for 380 guilders and then worked here as a barber, surgeon and surgeon. At the same time, he fed and accommodated customers and patients. He was a valued man of the town. His sons and grandchildren followed in his footsteps - as Löwen innkeepers and surgeons, governors and judges. The Stupfer era ended in 1753 with the death of Johann Michael Stupfer.

After several tenant changes and fire, the lion was run down. That changed in 1934 when Anna Grether from Mundingen was small, but resolute and experienced in gastronomy. With her the era of the Grether family began, which is still going on today. She turned the lion back into a well-run piece of jewelry, her son Walter Hermann, cook and confectioner, built a house with his Gisela & amp; Shout out some more.

Anna Grether's grandson Walter Arno learned the craft of cooking at the age of 14. In the kitchen, not only was the cornerstone laid for his further professional development, but also for his personal happiness: between pots and pans, the love for his future wife Ursula, who worked as an apprentice cook in the Löwen kitchen, kindled.

Then I first went from Schopfheim to Hawaii to work in the restaurant and bakery of relatives, other stations abroad were Switzerland and England. With 10 years of international cooking experience, we went back to the Löwen. For another 10 years, two generations of Grether managed the Löwen together.

In 2002 Walter and Ursula - both chefs - took over the house. They renovated all the rooms. Uncovered old wooden beams and walls. Designed the "feel-good chambers" with antique furniture and tiled stoves. Opened a southern courtyard and converted the barn into an event location. And last but not least, an Alemannic menu with dishes from the Middle Ages was established and gastronomic events were added to the annual calendar Property again alone with its dedicated team.

The future of the lion

The greatest wish is that one day the children will continue to lead the traditional lion with joy and pride. The chances are good: son Paul is now a trained chef and daughter Annabelle is a trained florist. Let's see if son Paul returns after escaping abroad to continue the lion tradition in Schopfheim ...

The Hotel and Restaurant Löwen is located in the Gündenhausen district of Schopfheim, close to both the Swiss and French borders. We are well connected to the transport network and easy to get to.

Further information on public transport in the region can be found on the page of the Südwärts Tourist Information .

The nearest airports are:

This website uses cookies. Those have two functions: On the one hand they are providing basic functionality for this website. On the other hand they allow us to improve our content for you by saving and analyzing anonymized user data. You can redraw your consent to to using these cookies at any time. Find more information regarding cookies on our Data Protection Declaration and regarding us on the Imprint.